How We Recognize Outstanding Achievement

Each year since 2000, AFPAAA has presented its highest honor to an individual who has provided extraordinary and distinguished service to the Association.

To receive the award, awardees must receive unanimous approval from the Association's Board of Directors.

Award nominations can be made by any AFPAAA member following these guidelines.

Since 1995, AFPAAA has teamed with SAF/PA to recognize one outstanding individual as the "Best of the Best" from all nominated bandsmen, broadcasters, multimedia, and PA professionals. In 2017, the award was renamed the "Brig. Gen. James W. Hart, Jr. Best of the Best Award" in honor of AFPAAA founder, long time treasurer, and board member Jim Hart.

Selected on the basis of professional excellence and significant contributions to the Air Force misson, the winner receives an engraved trophy and $1,000 from AFPAAA.

The "AFPAAA President's Award" is presented to individuals who are leaders in their particular field or who developed pioneering programs and policies that impact Air Force Public Affairs.

An individual does not have to be an AFPAAA member to be considered for the President's Award.

Whether the person is active, retired, a civilian employee, or a community leader, what counts is the contribution he or she has made to the Public Affairs community.

To be selected, an individual must be nominated by the sitting AFPAAA President, and then receive unanimous approval from all past-Presidents.

Best of the Best: 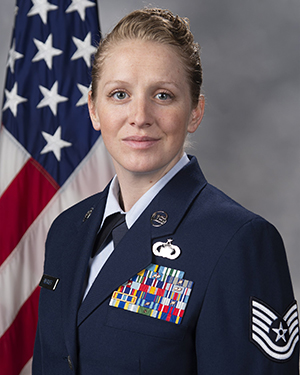 TSgt. Beckley is the Noncommissioned Officer in Charge of Command Information assigned to the 436th Public Affairs office at Dover Air Force Base, Delaware. She enlisted in the Air Force in 2009 and has served in a variety of positions and assignments to include wing Public Affairs, American Forces Network, Air Force Mortuary Affairs Operations and Joint Information Operations.

You can read more about TSgt Beckley in her very impressive biography here.