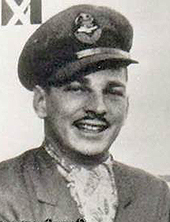 Reade Tilley was a World War II Ace with seven victories, all of which were scored while flying with Eagle Squadrons of the RAF. Following the war, he became deeply involved in the Air Force information field. During the Cold War he helped General Curtis LeMay set up SAC.

He is arguably the one person most responsible for developing the structure and practice of "modern" USAF public affairs. Many innovations he introduced changed military public affairs forever and are still in use today.

To learn more about Colonel Tilley, you can read his biography and Oral History here.