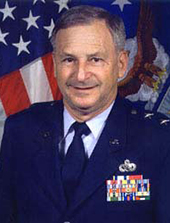 Thirty-seven years of distinguished active and reserve service as an Air Force public affairs officer only begin to tell the story of Mark Rosenker’s exemplary — and very much multifaceted — career.

As the Director of the White House Military office in the George W. Bush administration, Gen Rosenker played a key role on September 11, 2001, during the traumatic, harrowing hours after the World Trade Center and the Pentagon were attacked, and the heroic passengers of United Airlines Flight 93 lost their lives in Shanksville, Pennsylvania, preventing yet another attack on Washington.

Flying with President Bush on Air Force One, Gen Rosenker calmly planned and coordinated the president’s movements from Florida, their location when the attacks occurred, to Barksdale and Offutt AFBs, ensuring the safety and security of the nation’s top leadership at an uncertain time — a time when no one really knew whether, or where, more attacks might be imminent.

That’s just one of the many highlights of a remarkable life and career, a career that started, simply enough, with Lieutenant Rosenker's assignment to the AF Systems Command PA office at Andrews AFB, but would go on to see him serve five U.S. presidents, receive eight presidential appointments, and eventually be honored with the 2018 dedication of the University of Maryland's Mark and Heather Rosenker Center for Political Communication and Civic Leadership. The university named the Rosenker Center to "honor the public service of both Mark Rosenker (a University of Maryland communications graduate) and Heather Beldon Rosenker, who have spent their careers promoting communication for the public good."

With assignments in public affairs and recruiting early in his Air Force career, Gen Rosenker steadily progressed through more and more challenging jobs, both on active duty and as a reservist. He deployed to Saudi Arabia as the mobilization assistant to the commander of Military Airlift Command during Operation Desert Shield. At various times in his career, he served in top level positions as the mobilization assistant to the Secretary of the Air Force, to the commander of Air Force Reserve Command, and to the director of SAF/PA.

In the civilian world, Gen Rosenker was the deputy press secretary for President Gerald Ford’s presidential campaign, spent 23 years as vice president of public affairs for the Electronics Industry Alliance, was a radio and television analyst for CBS News, and was the managing director of the United Network for Organ Sharing. In 2006, Gen Rosenker became America's top safety official, with his appointment as the chairman of the National Transportation Safety Board. Vice President Cheney’s remarks at the swearing-in ceremony are indicative of the high regard in which Mark was held by our nation’s leaders.

A 2021 inductee into the DINFOS Hall of Fame, Gen Rosenker had a long and impressive list of accomplishments in both his military and civilian careers. But to those who knew him well, his most significant accomplishment was the guidance, support, and mentoring he provided to scores of PAOs, who benefitted from both his wise counsel and the example of excellence he set.

Gen Rosenker passed away in 2020. A slide show containing pictures that trace his career is here. You can also read his obituary in the Washington Post here, and his official Air Force biography here.


Return to Hall of Fame Page