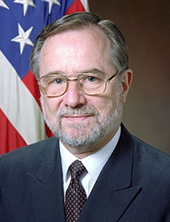 Jordan Edward (Buzz) Rizer had a 50-year career of military and government service. He spent 20 years on active duty, first enlisting in the Army, and then eventually retiring from the Air Force as a Lieutenant Colonel. He finished his distinguished career as the Director of AFIS — the American Forces Information Service — where he oversaw DINFOS, the Armed Force Radio and Television Service, Stars and Stripes, the Joint Combat Camera Center, and the American Forces Press Service.

Buzz had a rare combination of being a visionary with a gifted sense of detailed organization and a leader with a disarming, motivational style. He was especially adroit at making up off-the-cuff statistics to back whatever case he was pleading. Amazingly, he was almost always right. It showed his deep understanding of the issues he was committed to resolving and the progress to which he was endlessly committed.

During the Vietnam War, his singular persistent efforts brought the Armed Forces Radio and Television Service to underserved Air Force bases in Thailand. Buzz is also credited with the vision for, and as the architect of, placing television systems aboard Navy ships.

When he passed away in 2019, the former Navy CHINFO, Rear Admiral Tom Jurkowsky, penned a tribute to Buzz that you can read here. You can also read his obituary in the Washington Post here.