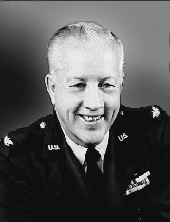 Colonel Oldfield was a newspaperman, radio commentator, public relations consultant and specialist in international relations. During WWII he served in Europe on the staffs of General Eisenhower and Field Marshal Montgomery. He subsequently was in charge of the press camp that followed the advancing Ninth Army toward Berlin.

After the war, Oldfield was a publicist at Warner Brothers Studios in California. He reentered the Army in 1947 and transferred to the Air Force when it became a separate service. He was one of the pioneers of Allied Command Europe, serving as General Eisenhower's advance man when Ike returned to Europe in 1951 as Supreme Allied Commander.

He also served in numerous high-profile Air Force PR assignments including director of public affairs at Air Defense Command and NORAD. After retiring from the Air Force in 1962, for the next 27 years he was Corporate Director of International Relations for Litton Industries, Beverly Hills, CA. 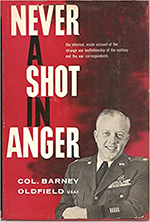 A prolific author, Colonel Oldfield's account of World War II press camps and the relationship between the military and the press — "Never A Shot in Anger" — is full of insights and stories that military PAs will appreciate. While some may be out of print and difficult to obtain, you can see a list of books he wrote that may be available through Amazon here.

To learn more about Colonel Oldfield, you can read his biography and Oral History here. You can also read "No Card From Barney This Year" here — a moving tribute to him from a film industry colleague — his obituary in Variety here, and a biographical profile of him taken from the book cover notes of another of his many books here.