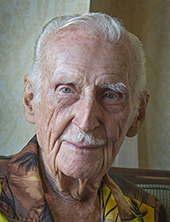 As a combat camera cinematographer, Doug fought in three wars — World War II, Korea, and Vietnam. He was forced to bail out of two planes after taking enemy fire during World War II. The first time he was shot down — over Romania — he and a fellow crew member had to evade capture for 25 days. The next time he got shot down, the Germans made him a POW.

In Korea, he somehow managed to avoid any unscheduled landings, but that wasn’t the case during the Vietnam war, when he was shot down for the third time. Separated from his pilot after they bailed out, he evaded capture by the Viet Cong. His pilot, though, wasn’t as lucky, and spent the next four years as a POW in Hanoi.

Doug tells the amazing story of some of his exploits in a not-to-be-missed video here.

After more than 30 years of active service, Doug joined the Air Force Audio Visual Service HQ as a civilian, where he directed combat documentation programs and critiqued documentary projects. He traveled to every AAVS unit worldwide, providing seminars on documentation techniques. He also managed the DoD Military Cinematographer of the Year competitions and helped establish the Military Motion Media Studies Program at Syracuse University.

In addition to his military decorations, Doug's many awards include the Combat Camera Lifetime Achievement Award and the Air Force Outstanding Civilian Career Service Award.

You can read more about Doug, and see a video interview with him at the age of 96, in the very appropriately titled Airman Magazine article "They Call Me Legend" here.