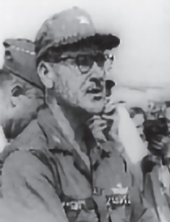 Bill McGinty served as a fighter pilot in both the Royal Canadian Air Force and the Army Air Forces during World War II and was credited with 3.5 German aircraft shot down during 85 missions. In 1948 he began working in public affairs at Air University HQ, at Maxwell AFB, Aabama. He was deputy and acting director of information for Far East Air Forces, Tokyo, from 1950-1952. During his career he was instrumental in communicating the need for America’s intercontinental ballistic missile and space programs.

His battles with the public affairs bureaucracies at DOD and the Military Assistance Command - Vietnam (MACV) in 1965-66 to bring the Air Force's story to the American people were legendary. His public affairs acumen was recognized by the Aviation and Space Writers Association who presented him their Orville Wright Award in 1966. After retiring from active duty, he became The Boeing Company's Washington, DC. public affairs director.

To learn more about Colonel McGinty, you can read his biography and Oral History here.

The June 7, 1995 edition of the Washington Post contained Colonel McGinty's obituary, which you can read here.