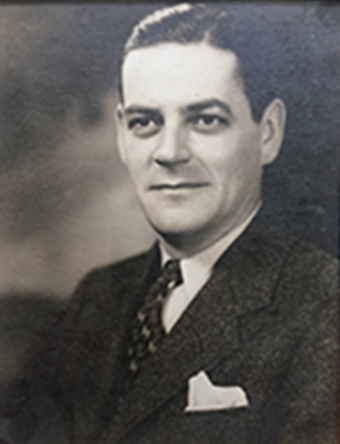 “As instrumental as anyone in creating the Air Force.”

That description of Stephen F. Leo, the first Director of Air Force Public Relations, came from someone who would know: the United States Senator from Missouri, Stuart Symington, who before he became a senator was also, of course, the first Secretary of the Air Force. Mr. Symington said that “everybody who believes in air power and a great Air Force owes a debt to Steve Leo.”

Before World War II, Mr. Leo was a reporter and editor with the Gannett newspaper chain. Going from journalism to public service, he became the Executive Secretary to the Governor of Maine, who then appointed him as Chairman of the Maine State Liquor Commission. Donning a uniform during World War II, he served in the China-Burma-India theater, and was a military attache to the Truman Senate Committee investigating war contracts.

As a civilian after the war, but before the Air Force officially became a separate service, Mr. Leo wrote a plan outlining public and congressional relations strategy for the fledgling military branch. He spent 1946 in Berlin, Germany on the staff of the American Military Government, but was recalled the following year when Mr. Symington became the first Secretary of the Air Force and appointed him to be the Air Force’s first Director of Public Relations.

After three very consequential years in that role, developing the principles that continue to guide Air Force public affairs to this day, Mr. Leo became the Special Assistant to the Chairman of the National Security Resources Board. He later headed the Washington office of Sverdrup and Parcel, a professional services company that operated Arnold Engineering Development Center in Tennessee under contract to the Air Force. In 1960, when Senator Symington ran against Senator John Kennedy for the Democratic nomination for president, he once again called on Mr. Leo for help, making him the campaign’s press secretary. A profile of Mr. Leo as a presidential campaign press agent is here.

Mr. Leo's contributions to the development of the Air Force and to Air Force Public Affairs are legion. Volume Number One of the "Headquarters Public Relations Letter" — which you can read here — provides insight into Mr. Leo's public relations philosophy. Under his leadership, the Air Force originally organized the public affairs and legislative liaison functions into one combined department. For a perspective on the organization of Air Force public affairs in its early years, you may find this brief history — "The Information Program Through The Years" — interesting.


According to those who worked with him, Mr. Leo was particularly talented handling political issues. Col W.C. Robinson, who worked for him, said "... he was probably the smartest man I ever knew ... but, he suffered no fools." His approach to public relations was not without controversy. David Lawrence, the conservative syndicated columnist and founder of US News and World Report magazine, wrote about Mr. Leo's very effective PR campaign in the tough, very political "roles and mission" competition among the services, particularly between the Navy and the newest service, the Air Force. While far from a fan of the Air Force's position, Lawrence grudgingly acknowleged Mr. Leo's savvy, calling him a "propagandist", but also "the best ghost writer of speeches" in Washington. A much different perspective came from another Washington columnist, Guy Richards, who was impressed that Mr. Leo was as adept at keeping things out of the press as he was getting them in.

Mr. Leo retired from Sverdrup and Parcel in 1969, and returned to his native Maine. In retirement, he served as a director of the alumni fund of his alma mater, Bowdoin College. He passed away in 1983. You can read his obituary here.