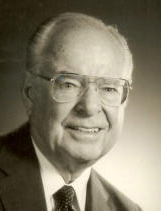 Ever wonder where the word “aerospace” came from?

Frank Jennings was a skilled author, forward thinker, and kind and generous friend to all who knew him. Frank left active duty after World War II, but didn’t leave the military. As a civilian, he helped establish the Air Force Internal Information Program in 1954. He wrote Air Force News Service editorials and features for base newspapers, and the “Yellow Letter” sent to Air Force information officers.

Starting in 1959, and continuing for the next 26 years, he wrote and edited the twice monthly “Policy Letter for USAF Commanders” to keep senior leaders throughout the Air Force up to speed on national, defense, and Air Force policy issues. An Air Force reservist, he retired as a Lieutenant Colonel in 1972. In civilian life, he was the GM-15 Chief of Policy and Program Development in the Internal Information Division, retiring in 1985.

Frank’s insightful writings had a major impact on the development of the concept of the sky as a limitless operational medium. The first to use the term “aerospace” to describe that concept, he outlined the genesis of the word in a number of scholarly articles, including the spring 2001 edition of “Air Power History”, which you can read here, and the fall 1990 edition of “Air Power Journal”. The “Air Power Journal” article, along with additional papers about the origin of the concept and the word that, thanks to Frank, came to define it, is included in Frank’s Oral History, which you can read here.

Frank’s writing didn’t stop when he left the Air Force, however. He threw the same energy and gift for words that he was known for in the Air Force into chronicling and promoting his adopted hometown: San Antonio, Texas. From organizing San Antonio’s first annual Founders Day to writing the definitive history of the city, he ensured the city’s unique multicultural character would not go unnoticed and uncelebrated. He somehow also found time to write historical articles and book reviews for Texas newspapers and magazines, and articles on military doctrine for numerous national security oriented publications.

You can read Frank’s biography here. And if you're a Texas history buff, you'll find plenty to whet your appetite in the "Frank Jennings Collection" - an ecletic repository that showcases his many talents as an author and historian.