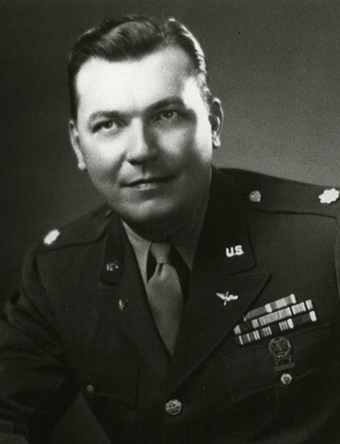 Lieutenant Colonel Alf Heiberg served as the first band leader of the renowned Army Air Forces Band from 1941 to 1944 and was the first Chief of Bands and Music at the Pentagon from 1944 to 1946. He was assigned to Bolling Field, D.C. to organize, recruit, and lead the Official Band of the Army Air Forces.

As Chief of Bands and Music, he distinguished himself by developing and supervising the activities of 271 AAF Bands. In the winter of 1944-45, he was responsible for making all arrangements for the Royal Air Force Band on a 10,000-mile tour of key AAF installations and civilian communities throughout the U.S., which contributed greatly to the goodwill and public understanding between Great Britain and the United States of America.

For his contributions to the Air Force and Air Force music, General Henry “Hap” Arnold personally awarded him the Legion of Merit in the Fall of 1945.

You can learn more about the birth of the Army Air Forces Band and the role Lieutenant Colonel Heiberg played here.