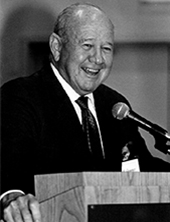 Bill Greener leveraged a 20+ year Air Force public affairs career into a series of important senior Cabinet and Presidential public affairs positions. In so doing, he proved that USAF PA’s were accomplished, professional and, most important, highly competent.

A B-24 navigator in the 8th Air Force during World War II, Greener flew 35 missions over Germany. After stints as a navigator, Captain Greener transitioned into the PA career field, where he remained until his retirement from active duty in 1970 as a Lieutenant Colonel.

His blunt but always pertinent thoughts about common and crisis situations were - and continue to be - valuable lessons for those he mentored and those he served.

In the July 2001 issue of News and Notes, another Hall of Famer, Chuck Lucas, wrote a profile of Bill Greener, which you can read here. To learn still more about this public affairs legend, you can read his biography and Oral History here.