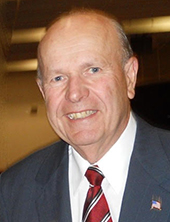 Not many PAOs get chosen for the prestigious but demanding job of Military Assistant to the Assistant Secretary of Defense for Public Affairs (ASD/PA). Unless, that is, you're Mike Burch. Mike was tapped twice for the job, in two different presidential administrations — by ASD/PA Tom Ross in the Carter administration, and again by ASD/PA Henry Catto in the Reagan administration.

Impressive, yes. But that was just a taste of things to come. President Ronald Reagan and Defense Secretary Caspar Weinberger thought that Mike’s talents had much greater potential, and in 1983 appointed him to be the ASD/PA. With that appointment, Mike became only the second retired military officer (fellow Hall of Famer Bill Greener was the first) to hold the office since the Department was organized in 1947.

Not bad for someone who just wanted to escape the possibility of a mundane job in St. Louis, or of getting drafted into the Army. A degree from the University of Missouri in 1963 and an AFROTC commission realigned his career prospects, and his initial assignment as the Information Officer for the 1st Air Commando Wing at Hurlburt Field left him with experiences that shaped the rest of his twenty year Air Force career. He would have been happy to stay right there, but the Air Force had other ideas, sending him to subsequent assignments at 12th Air Force, Ubon RTAFB in Thailand, and Tactical Air Command headquarters.

On a 1971 TDY to Australia as PAO for a squadron of F-111s, Mike unexpectedly became an unwitting spokesman for the US Government when he found himself in the middle of an Australian media and parliamentary debate on whether to purchase F-111s. That TDY changed the direction of his career, as he was summoned to the Pentagon to brief the Secretary and Chief of Staff on the controversy, leading to his reassignment to the Secretary of the Air Force Office of Information (SAF/OI) in 1972.

While many do all they can to avoid a Pentagon tour, Mike enjoyed and thrived in the high pressure Washington environment. He was the administrative assistant to both SAF/OI director Brig General Guy Hairston and SAF/PA director Brig General Jerry Dalton. Moving from the Air Force to DoD, he was the deputy chief of the Operation News Branch before becoming the military assistant to Mr Ross and then Mr Catto.

Mike spent eleven of his twenty years in the Air Force at the Pentagon. Those eleven years spanned the Nixon, Ford, Carter, and Reagan administrations — providing him great lessons in national defense and the ways of Washington. Retiring as a Lieutenant Colonel in 1983, Mike remained in Washington, first joining the civilian world as the president of Washington Communications, the publisher of the Washington Journalism Review.

He was not in that position very long, though, before the SECDEF asked Mike to return to the Pentagon as the tenth ASD/PA, where he could now take those lessons he had learned and deftly put them to use on the national and international stage. He served as the ASD/PA from 1983 to 1985.

After leaving the Pentagon a second time, Mike then headed to his boyhood home, St Louis. But his new job there was not the mundane one he had escaped from when he was young. He spent seven years working for McDonnell Douglas as Corporate Vice President, Public Relations. In 2000, he founded wastewater treatment company Nature Works, Inc, where he remains busy, at least when he is not farming on the weekends.

In his memoir, Ambassadors at Sea: The High and Low Adventures of a Diplomat, Henry Catto praised two men in particular as examples of outstanding military officers. One was then-Colonel Colin Powell, and the other was Lt Colonel Mike Burch. Mr Catto said that “Mike, who succeeded me as assistant secretary, was a genius at foreseeing problems and offering solutions.”

Colin Powell? That's pretty heady company to be included in. But without a doubt, that was company in which Mike belonged.